The Stats of the Raid Bosses over the past several months have changed repeatedly, therefore only the most recent few will be displayed. 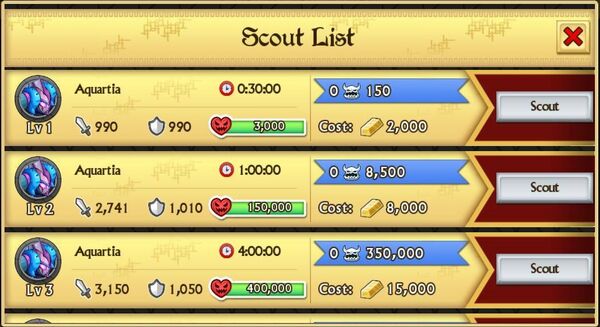 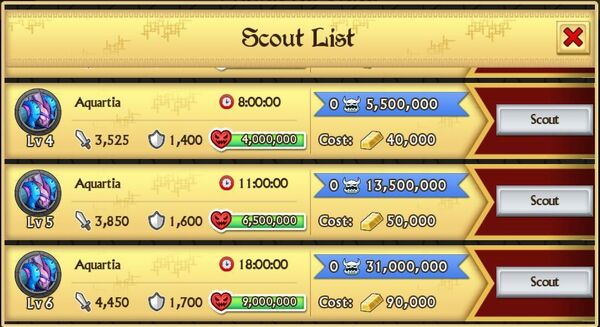 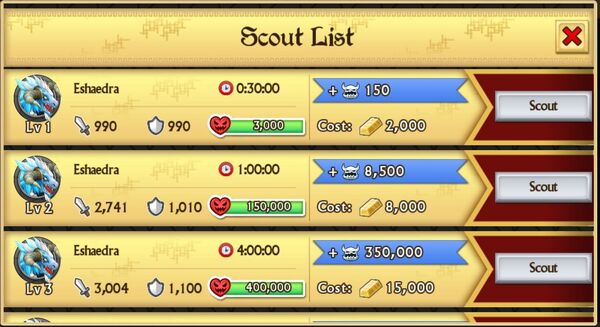 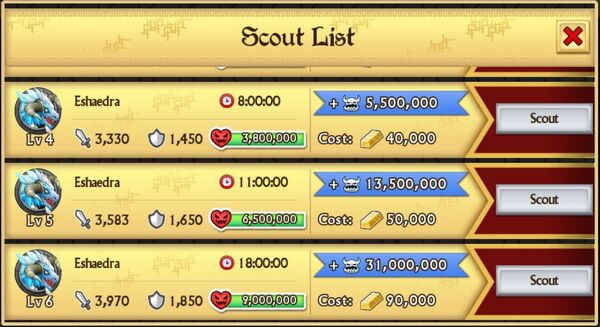 NOTE: Blitz raids have different stats that are not reflected in the charts (and pictures) above. The raids advertised as "blitz" raids have adjusted attack and defense values that reduce the overall time in battle. Reward milestones are also adjusted appropriately.

All Raid Boss scoutings can only appear through leadership action within your guild. A leadership member must use gold from the Guild Bank to finance a scouting party to find a Raid Boss.

Your guild may have up to 5 Raid Bosses scouted at one time. If they have 5 bosses available to fight, they must defeat (or let escape) a boss that is present before they can scout new ones.

A guild earns Raid Points based on their performance. Raid Points are earned for each point of damage a Knight does to a Raid Boss. Don't be afraid to fight high level Raid Bosses, because although they are much harder to defeat, losing has no penalty to points earned. Fight hard and fight often, because successfully defeating a Raid Boss before it escapes awards a victory bonus to your guild's total Raid Points, and higher level Raid Bosses have a much larger victory reward!

All earned Raid Points are applied directly to your guild's ranking. Collect the most Raid Points by the end of the Raid Boss event to earn massive rewards for your entire guild!

Raid Bosses are fought similarly to Arena and Adventure battles, but use Raid Energy to initiate the fight. The armor setup you use for fighting Raid Bosses is different from the setup used in fighting against Epic Bosses or other features, so you are free to tailor your armor to the boss without affecting your armor setup for the other features in the game.

It costs 1 Raid Energy to start fighting against a raid boss. Raid Energy replenishes at a rate of 1 per 25 minutes and can also be refilled by tapping the Raid Energy bar at the top left of the Raid Boss menu.

The game will then award everybody full damage points without wasted overflow damage and register a kill on that level 2 raid boss for the bonus points. Repeat this with other teams for the other 4 scout slots if you have that many people online. Example: 3 players doing 30000, 30000 and 25000 damage to a 70000 health raid boss would combined get 30000 + 30000 + 25000 + 10000 bonus points = 95000 points for their guild, while attacking one after the other, they would get 30000 + 30000 + 10000 (15000 damage unused since the raid boss is dead) + 10000 bonus points = 80000 points. If on the other hand 9 people doing 30000 damage each pile on the same level one raid boss at the same time, you could have had the 10000 bonus points from a second and third level one raid boss. Any higher level raid bosses result in less points per energy because of their higher attack, but because of the higher bonus can be better for the guild. Consensus so far is that lvl2,lvl4 and lvl6 are the best choices (as long as your guild is able to kill it within the time frame.)

The rewards and where to find themEdit

For many people the available rewards for a Raid Boss can be viewed from the "Rewards" tab of the Raid Boss menu. Only guild members who fought in the Raid Boss event can earn most of the rewards shown for the various leaderboards, but every member of the guild that participated can get the guild placement rewards during the redemption period.

There are multiple ways to earn rewards, both through your own fighting against the boss and from points earned by your fellow guild members:

Note: Milestone rewards are earned immediately when you have enough points, much like milestone rewards in PVP. For other rewards, each guild member must log in to the game during the Raid Boss event's redemption period in order to claim their rewards. Make sure to work as a team, because competition will be fierce to get the highest and most powerful rewards for each Raid Boss event!

Each Raid Boss event has its own leaderboards which track your guild's Raid Points and your own Raid Points to determine the rewards you and your guild will earn at the end of the event. Check back often by tapping the "Leaderboards" tab of the Raid Boss menu.

Retrieved from "https://knights-and-dragons.fandom.com/wiki/Raid_Bosses?oldid=349219"
Community content is available under CC-BY-SA unless otherwise noted.