A Guild can be joined in order to give the player access to additional features of Knights and Dragons. You can either make a request to be accepted into a guild, or pay to create your own.  Guilds are available on both Android and iOS versions of Knights and Dragons. Being in a Guild lets you partake in Guild Wars, which allows guilds to battle each other in order to earn rewards; much like the Arena and Epic Bosses.

This is the main page from where you navigate the guild system. You can view your guild (or create one), find a guild, participate in events, view any messages, or consult the Guild Help Menu. 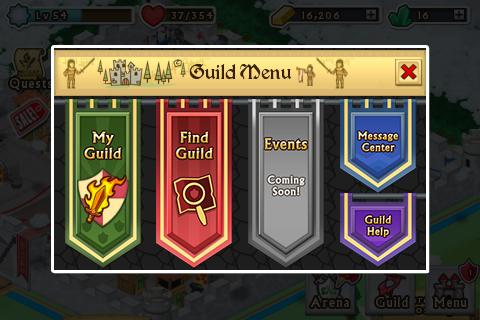 If you are not part of a guild, the "My Guild" button is replaced with the "Create Guild" button. Here, you may go through the process of creating a guild in this tab. It requires you to have at least 300,000 Gold to pay for the creation of it. Once you click on the Create Guild button, you need to choose a name for it, select a main element, as well as create a Banner for your guild. Banners have different Icons available depending on what element you select, such as a Ghost for Spirit, a Tornado for Air, and so forth.

This is the main body of the Guild system. Here, you can view everything regarding your guild.

In the Main tab, there are a number of quests you can assist with in order to help your guild level up. You can also view the Guild Description, the Requirements for joining, and you have the option to leave the guild here. 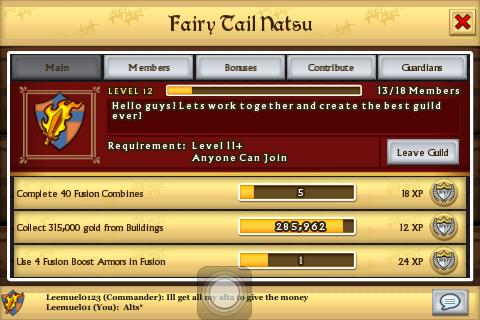 These are unlike normal quests in that they are undertaken by the entire guild together, with your cumulative efforts being recorded. If you press the MVP shield on the right side of the Quest Board, you can view which guild members have done what for a quest, ranked in order of who has contributed the most. If you have contributed the most at the end of a quest, then you earn an MVP badge on the Members page.

You can chat with any guild member who is online. Chat lines are limited to 140 characters. 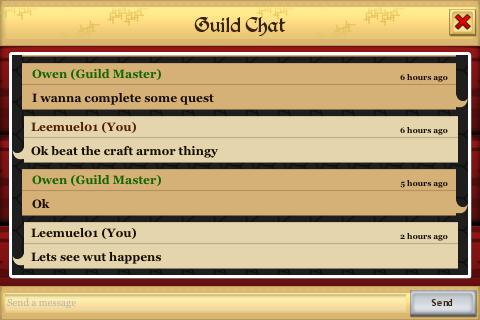 Here, you can bring in new members to your guild, inviting from your Friends List or by entering a Friend Code. You also have the option to see members profiles, or boot them from the guild. If you are the Guild Master, have the additional option to rank your Members up or down. 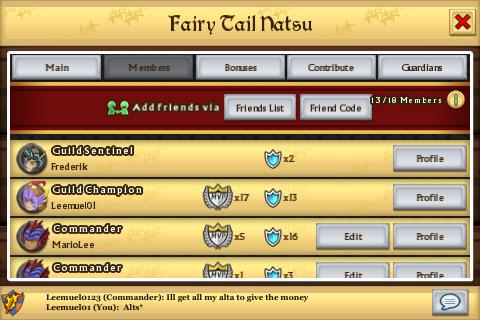 Found as (i) in the top right corner. Here you can see the rankings of the leaders of the guild. There is only one Guild Master, Champion, and Sentinel, but there can be more than one High Commander and Commander. 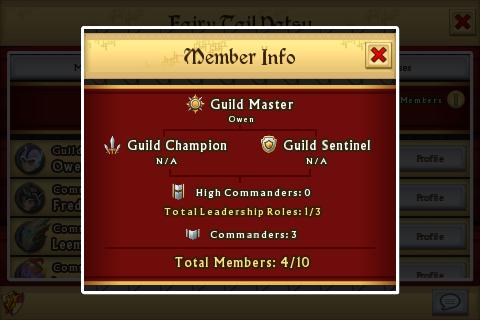 Here, you can see what Bonuses the Guild gives you for a certain element of the armor you wear. The Bonuses can be improved for an ever-increasing amount, starting at 1,000,000 Gold. The effects gained apply to BOTH elements of an armour (E.g., an Earth/Water Armor in a guild with +10% to those elements would have a +20% Boost) 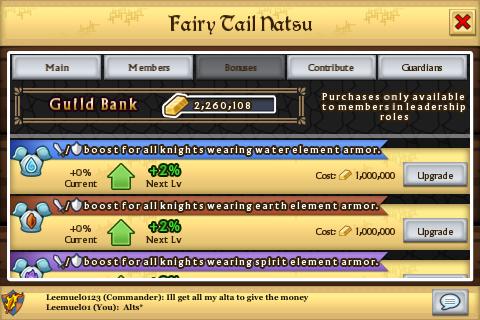 The following is the cost (per element) to increase the bonuses.

Since there are 5 elements for bonuses to be applied, each of the above figures is multiplied by 5 as follows to increase each individually:

You can contribute gold to your guild . The minimum amount of gold to give is 10,000 gold, and if you donate enough gold, you can get rewards. Donations go toward upgrading your Elemental Bonuses, and the purchase and upgrading of Guardians. Note that needed donation amounts to gain your Fusion Armor reward does NOT reset when switching guilds. 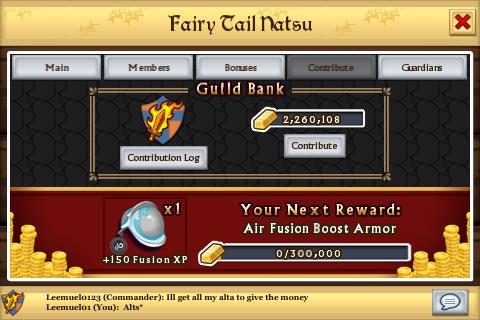 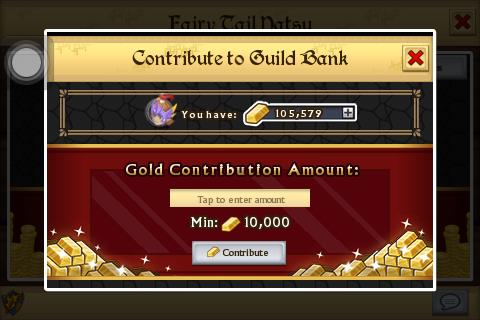 Here, you can see the amount of gold what you and the other members have contributed to the guild, both overall and on an individual basis. You can also check their profiles from here. 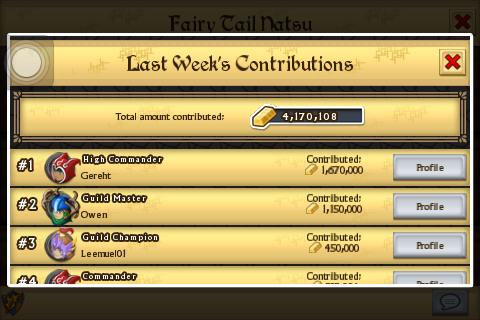 Guardians are creatures (formerly boss monsters) that can be used by your guild. They each cost 100,000 gold, and can be individually upgraded. The maximum amount of guardians your guild can have is 70. All purchased guardians can only be used once per battle. Even if they survive the battle, they will vanish.

Each come at level 1, with attack of 684 and defense of 212. They can also be upgraded with the gold contributed to the guild. 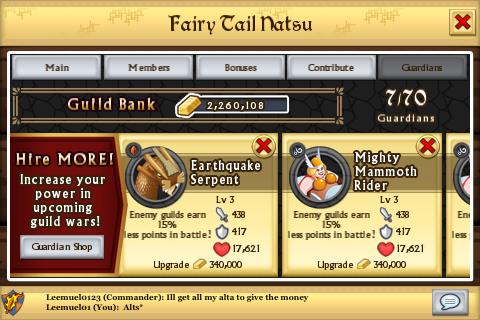 Here, you can purchase a Guardian for the sum of 100,000 Gold. Having Guardians will assist in the upcoming Guild Wars events, with more powerful ones reducing the amount of points earned by an opposing guild.

You can browse the entire list of guilds here, and view their profiles. If you are not part of a guild, you can also send an application to join from this page. 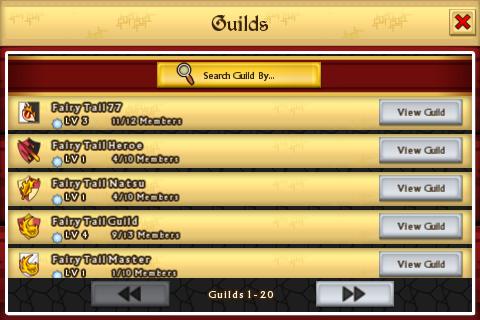 Instead of browsing the entire list of guilds, you may search for a specific guild, either by name or by element. 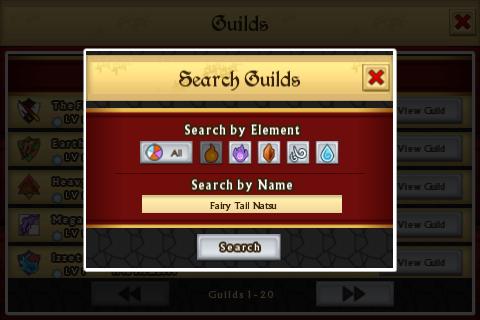 From the Profile, you can see the Guild's Message, requirements for joining, amount of members, and view the profiles of individual members. If you do not have a guild, you may ask to join from this page as well. 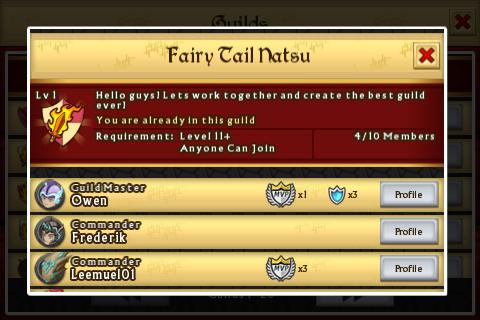 Here, you can check what is going on in your Guild. You may also Accept or Decline requests from players who wish to join your Guild.

You can Decline or Accept a Request. Only higher ranked members can bring in new members or turn them away. 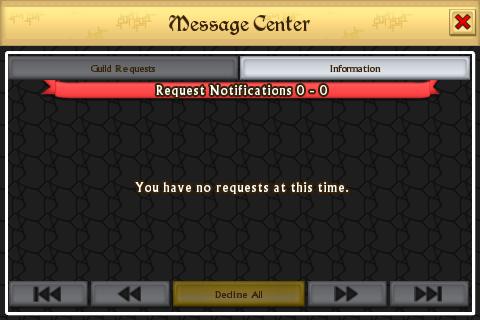 You can check whether your Member had completed a quest, a new member is added, etc. here. 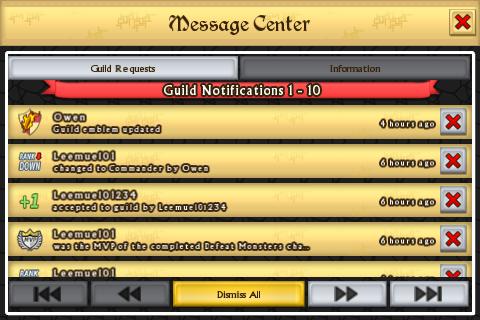 Guild Wars is where Guilds compete for supremacy & prizes. Certain armors, keys and gems will be rewarded to EACH MEMBER of the top guilds in the competition based on your Guilds ranking similar to how arena rankings work. This means that if a guild wins, each of the members will get an amount of gems, keys, and armors - irrespective of individual level at the end of the Guild War event.

Ranking is determined by the number of points your guild has earnt during battles with other guilds - so be mindful, even if you are winning by a good margin, don't stop bringing the pain - the goal is to get as many points as possible as victory gives 50% bonus points to the winning guild.

To start a Guild War, you must declare war on the Guild War screen - after a few minutes your Guild will be matched to a random guild with similar strength.

If you have Guardians, 1 will be deployed each battle - if your Guardian is not defeated, the opposition are points penalised depending on the strength of the Guardian - See Guardians - Guardians once deployed will be lost forever even if unbeaten at the end of the battle, so I'd suggest if you are a low level guild don't waste money on lvl 10 Guardians!  In my experience, lvl 5 Guardians are usually sufficient for all but the most organised opponents.

You should have a Guild Sentinel nominated and this should be one of your strongest members - a strong sentinel prevents the enemy guild from being able to pick off weak members earlier. You are able to bring down a Guild Sentinel by defeating it or by attacking and losing to the Sentinel 5 times. When the Sentinel of a Guild is brought down, the rest of the Guild becomes open to attack.

Your Guild Champion should be one of your strongest members.

This is where all the Guild bonuses really add up - there is really no point having a non active Sentinel, Champion or Master as you need to take advantage of the accumulated bonuses for best effect (i've seen guilds with Commanders and High Commanders with much better ATT/DEF than the Sentinel and Champion)

Sentinel & Champion get 7% ATT bonus, Master gets 10% ATT bonus, combine this with MAX Element bonuses and you can really dish out the DPS

At the start of the war you have 4 attack options:

Attack Gate: Attacking the gate yields few points, but is the only option if you are a weak fighter.

Attack Guardian: You will receive a small number of points for each attack and the points penalty will no longer apply if you defeat it. Additionally, if the guardian is defeated, a reward will be given to the player who did the most damage against the guardian,

Attack Sentinel: Bring the sentinel down as fast as possible to allow the rest of your guild to attack any of the players of the opposition. This is where you get the most points - the sooner you beat Sentinel and Guardian, the bigger the points reward for each individual PvP.

Attack Players: In the event that the enemy guild has not nominated a sentinel, just have a field day attacking the players.

Timing in a Guild War is important.  Each Battle lasts just one hour, however it also takes 100 minutes to regenerate 100% of battle health (4). As a battle lasts 1 hour, it is possible to attack 6 times without having to spend gems per battle - 4 attacks at the start of the battle and then once every 25 minutes as your Battle Points regenerate. Avoid spending extra energy if your guild is losing the battle and splurge on energy if your guild is winning.

War should be declared when everyone has maximum energy and can expand all of them in the next hour. This maximizes the chance of victory. Therefore, it is recommended that only the top management in the guild declares war. Juniors going "What does this button do?" can often result in a bit of tension within the Guild.

Guild gifting events are small events that when you buy certain gem packs you are able to have a chance to get gift armors for your guild.

You can go to Guild Help for additional information regarding guilds. It covers most of what we went over on this page, so it's a useful reference if you need to know something in-game.

When your Guild Master is inactive for a longer period of time, consider sending Gree Support a message to get him replaced, this is best done by either Guild Sentinel or Guild Champion. Whether this works if others send the request (like when all top 3 guild ranks are inactive) is not known.