Fusion boost armors (FBA) exist for each of the five elements. They are intended for use in enhancing other armors. The exist in Super Rare, Ultra Rare, Legendary and Epic variations. They can be found in Fusion Boost Chests, or obtained by contributing gold to your guild and in Raid milestone rewards. In a recent Guild Wars update, you can obtain 2 random fusion boost armors by doing the most damage (or defeating) the opposing guild's guardian if their guardian is level 7.

FBA's are not recommended for combining; they do appear to count the same as any armor of the same rarity for combining purposes, but if you do combine it (and are lucky), you may get some great armor. 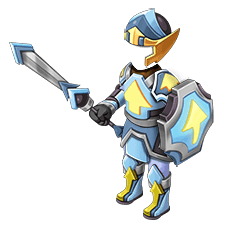 For Epic and above rarities of armors, use FBA for upgrading on level 60 and above.

Save FBA to enhance better armor but do not use it on weaker/lower level armor. FBA's are found in chests and can be obtained by rewards (guild wars, tournaments, etc.).

Since FBA has very low attack and defense stats it should not be used for fighting, however it will do extra damage and give extra points when battling in Guild Wars and Blitz Wars.

The higher rarity the FBA, the more Enhancement points the armor gains (and therefore the faster you can upgrade your armor).

Retrieved from "https://knights-and-dragons.fandom.com/wiki/Fusion_Boost_Armor?oldid=337382"
Community content is available under CC-BY-SA unless otherwise noted.