View source
watch 01:36
We're Getting Mutants in the MCU - The Loop
Do you like this video?
Play Sound

Fusion is a process which combines two armors of completely separate elements into one armor that uses one or two elements from the initial armors. Fusion of Rings and Amulets does not require their item elements to be different.

Fusion is a GAMBLE, you can get a worse armor than you started with, a better armor is possible, but getting better armor from FUSION IS NOT GUARANTEED. 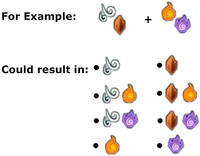 →*Note: Fusion will not always follow this chart. Changes and unusual results have been remarked.

NOTE: Now you can only combine armors of the same rarity above Rare (Common and Uncommon can still be fused together interchangeably).

Listed on the chart below are possible results of fusion. Fusion is an imprecise art, and you may not get the exact result you want the first time. You will likely require several attempts in order to obtain a rare armor. The list is not complete, and it is entirely possible you will receive an armor not mentioned here whilst creating new armors.

NOTE: None of the combinations listed below are guaranteed any longer as of the update in late 2016. There are multiple different combinations possible now, including fusing two like elements and receiving an element that you did not originally have at all. For instance, fusing two Epic armors that have Fire -- but no Water -- and receiving a mono Epic Water armor.

As a result, Fusion is even more random than before and does not have the "predictability" it used to have before.

Please do NOT add armor to this table without providing a screenshot of the fusion on the Screenshots page.

Note: the february 2017 fuse update made this section rather outdated. Nearly all Dragonforged should now be fusable. Additionally: As of early January 2020, virtually all (if not all) Dragonforged fusions result in early Seasonal Shadowforged (read: Season 1 through 10).

Due to recent changes with Shadowforged, virtually all armors up to roughly Season 40 are possible from fusion of previous Seasonal/War/Raid armors. Currently it is possible to fuse up to 5 seasons newer than the armors used.

Note: Shadowforged has some special rules that make fusion different than other rarities.

Community content is available under CC-BY-SA unless otherwise noted.
Advertisement