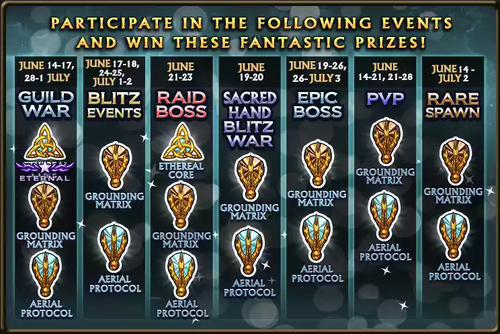 This event is different from prior events in that there is no armorsmith/crafting aspect. Instead, there are three primary materials that are used for purchasing of armors in the Limited Shop. These materials are the Aerial Protocol, the Grounding Matrix, and the Ethereal Core.

Players need a total of 7000 Aerial Protocols, 1200 Grounding Matrixes, and 160 Ethereal Cores to "tier up" their chosen armor to the maximum of T12.

These materials are found in the Login rewards (500), Arena, Guild Wars, Raid, and Rare Spawn.

These materials are found in the Login rewards (150), Arena, Guild Wars, Raid, and Rare Spawn.

These armors are used to combine with the T7 through T9 armors to get the armor up to T10.

These materials are only found in the higher milestones in the Guild Wars and Raid, and also in the final event rewards for top spots (T1 through T10, I believe).

Finally, there are also "Reallocation" armors that can be used to re-allocate the second element if players decide they do not want the element combination they originally chose any longer. For example, a player made a T10 E/F armor, and wants to change to E/S -- the Spirit Reallocation armor could be purchased and combined with the T10 E/F to make it T10 E/S instead.

A full breakdown of the various Element combination Armor stats, Ring/Amulet stats and Set Bonuses are available here and here.

Retrieved from "https://knights-and-dragons.fandom.com/wiki/Decanniversary_2019?oldid=354394"
Community content is available under CC-BY-SA unless otherwise noted.