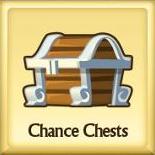 The Chance Chests are virtual chests where you can open them and receive excellent loot dependent on the chest. Over time, there are limited edition Chests which will be opened with the most gems. These chests along with the Rings and Amulets chest CANNOT be opened with a key. They both require gems to unlock.

Enchanted Chest is the 2nd chest you can open by using either 5 Gems or Enchanted Keys. You can win Potions, Fusion stones, Armors, Materials, Uncommon and Rare armor and more! The best armor you can get is a Fusion Boost armor or an ultra-rare armor.

Dark Prince's Chest is the most expensive (not including limited time chests which are usually 30-40 gems) out of the 4 chests which need 10 Gems to open or the Dark Prince's Key. You can win Armors with the rarity of Super Rare to Legendary, also including Nemesis. It was released 29th of March 2013. In September 2017 a few season 2 Shadowforged armors were added to the chest as super rare rewards.

This chest contains fusion boost armors, rings, amulets and Silver Coins. This is currently the only permanent chance chest that cannot be opened with a key, and must be opened with gems.

This chest no longer exists. It hasn't been recorded when it got removed. The Ring and Amulet Chest was a permanent chance chest that was released in the month of February 2015. This chest introduced the Legendary Tiers for Rings and Amulets, as well as the Fire Fusion Boost Ring and Fire Fusion Boost Amulet. This was then the only permanent chance chest that cannot be opened with a key, and must be opened with gems. You could win Super Rare Rings/Amulets to Legendary Rings/Amulets in this chance chest.

This chest can be opened using champion keys and contains armors up to epic, gold, gems and Dragon Keys. Dragon Keys gotten this way can be used on one of the Limited Edition chests that's priced at 799 gems for 40+12 openings.

This chest is only available when the Heroic Mode is active and can been opened using the keys gotten from completing locations there. It contains mostly gold, in actually decent amounts, plus also epic and dragonforged armors. Any keys leftover get preserved for the next appearance of the chest.

This chest can be opened using Spider Keys and contains Enchanted Keys, Dark Prince's Chest Keys and Shadowforged crafting materials. Up till august/september 2017, the materials in it were for the 12-material Shadowforged realesed before season 1 and Dragon Coins. At that point, materials for season 2-10 armors seem to have been added. Drop rate of crafting materials seem to average about 2-3 per opening of a batch of 11 chests.

WIth the new update limited edition chests cost 25 gems and chances at epics and dragon forged are higher than ever.

Please visit this page if you wish to share your Chance Chest rewards! Share:Chance Chests

Retrieved from "https://knights-and-dragons.fandom.com/wiki/Chance_Chest?oldid=347711"
Community content is available under CC-BY-SA unless otherwise noted.