The arena is a place where you compete for prizes and earn ranks fighting Player Vs. Player.

A large update to the arena was brought on November 8th of 2013, featuring win streaks and prizes for those win streaks. This makes arena competition a good way to earn armor sets and keys.

Players get 5 energy given to them for free and regenerate 1 energy every 25 minutes. Players also have the option to purchase more additional energy by spending gems. Other ways to earn it is by completing quests, getting a win streak and a chance with a log-in bonus.

It costs 1 energy to attack a player, or you may spend 3 energy to do a Power Attack. A Power Attack increases the power of the Knights that are battling and may help you win more. 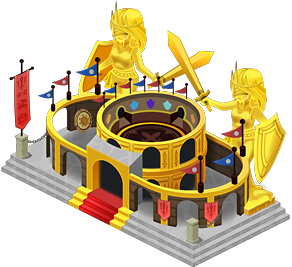 Participating in tournament matches will grant you tournament points. Losing a match gives you 0-20 points (10 for each opponent knight defeated), while winning gives you over 100 points most of the time; 30 points for defeating 3 enemy knights plus 70 points for winning the fight, plus a bonus. Forfeiting a match will gain you NO points, and only 5 gold. The arena also counts your win streaks, and gives out rewards (armor, keys, gold etc) for it.

Battling your friends outside the arena gives you 20 points for a win, 0 for a loss. There are no bonuses, but if you have 100 friends you can earn up to 2000 points each day. This is the equivalent of 20 arena matches or 5 hours of arena energy.

Win streaks in the new arena work similar to the old double down system of the previous arena. The player is rewarded at a win streak of 3, 6, 9, 12, 15, 18 and 21,26,33,40. Prizes include armors, enchanted keys, and arena energy. The streak lasts for 10 minutes, and if the timer runs out the win streak will be reset.

To figure out how long it is until you get more energy, you have to do "modular arithmetic": keep subtracting 25 minutes from the counter until the result is less than 25 minutes, and that is how long you must wait for your next energy. So for example if it says that it is 1 hour and 17 minutes before your energy is fully restored, that is 77 minutes. We subtract 75 (25, subtracted 3 times) to find out that actually we will get another energy after only 2 minutes.

It is easiest to get a win streak of 10 without any gems, by starting each fight when the streak timer gets to around 1:15. Fights themselves take about 30 seconds, so this means that you get at least 9 minutes between battles. Your 5 initial Arena Energy will therefore last for 5 streak timers or 45 minutes, but after 25 minutes, the arena will give you an extra energy, which you can use for a sixth win. That sixth win unlocks the tier-2 reward (2 more energy), and as you use those up you'll pass the 50 minute mark (1 more energy). At the end of all that energy you will have a streak of 9 and 0 energy, but you'll be at the 72-minute mark—so before this last streak timer runs out you will pass 75 minutes (1 more energy), and then you'll have 10 wins.

However, with a little trickery and more time, you can get your streak up to 12. The trick involves starting a battle (spending the power) but waiting on the screen where your teams are lined up and it has the button which says "Fight!" —wait without tapping that button. This allows for a "long-lived battle": normal battles are about 30 seconds long, but these can be however long you want. The only cost is that you can't play Knights and Dragons during that time, so do it when you have something other than K&D but you know you're going to come back. (The trick works by exploiting the difference between spending energy and starting or resetting the streak counter. You spend energy at the beginning screen, but you start/reset the streak counter only at the battle's end. So even if they shut down the "Fight" screen some day, you could still do the same thing if you can pause the game when you switch to another window. Similarly there is a fast-forward button which can make battles faster, if it looks like an easy one and you're cutting it close to the streak timer's end.)

Make your first battle last 25 minutes with this technique, and you will get to start with a win streak of 1 rather than 0, which brings your total win streak up to 11. However, your first battle's win streak is not being "used" to generate energy because you are already at 5 energy, and the remaining 10 streak counters cannot generate the full 100 minutes of time to generate a fourth life.

To get to twelve you need to use the trick twice: immediately after your "free" 25-minute battle, start a long-lived battle which is 8-9 minutes long, timing it with some other watch. Since you spend energy at the beginning of the battle, while the second battle is being fought you will be regenerating energy. The remaining 8-9 minutes must be spread among all of the unused streak counters, so you should probably start matches as each streak counter hits 1:00 just to be safe. If you do this properly then once you're at 11 you will be nearly past the 100-minute mark, which will give you the extra life to take you to 12.

Aside from these, you can get arena energy two other ways:

The New Win Streak consists of better rewards then the old Win Streak.

The rewards in order of wins:

It is still only possible to get to a 10 Win-Streak without spending gems. Unless you win one of the 5 bonus energy reward tiers as part of your win streak.

Start with your first Arena Battle, wait 9 minutes, and then fight your next battle. Since it is a 9-minute time lapse, you can will wait for a total of 45 minutes, which means that you can get 1 Energy, and have 5 minutes left until the other. You can then fight your sixth battle, and you will be rewarded with 2 Energy. If you wait 9 minutes between the next 3 battles, you will wait a total of 27 Minutes. You will have 3 Minutes left until you can get another energy. You can fight your 10th battle, and get a 10- Win Streak. You will have to wait at least 1 hour and 12 minutes for the full cycle.

Level Bonus (outdated)
If your opponent is higher level then you, your experience is increased, up to 45 points for a win. Double down increases this value even more.

Shutdown (outdated)
If you defeat an opponent who has 3 or more kills (and thus have a kill streak listed on the encounter screen), you will gain another 20% bonus points on the exp earned for this match. This stacks with the double down and level bonuses, so if you gain 45 points for defeating a higher level opponent you will also gain 9 points shutdown bonus points.

Revenge (outdated)
The first 3 knights on the list of knights you can challenge will be those that defeated you earlier. Their tournament points and rank will alternate with the message: "Defeated You! Get REVENGE". Defeating these opponents will earn you a Revenge bonus of 40%. Note however that those knights tend to be stronger then you (as they defeated you when you had the advantage), so unless they won due to excessive missing on your side, or you were wearing very weak armor for a while, you usually cannot defeat them (unless you're lucky with crits and misses).

Retrieved from "https://knights-and-dragons.fandom.com/wiki/Arena?oldid=356503"
Community content is available under CC-BY-SA unless otherwise noted.